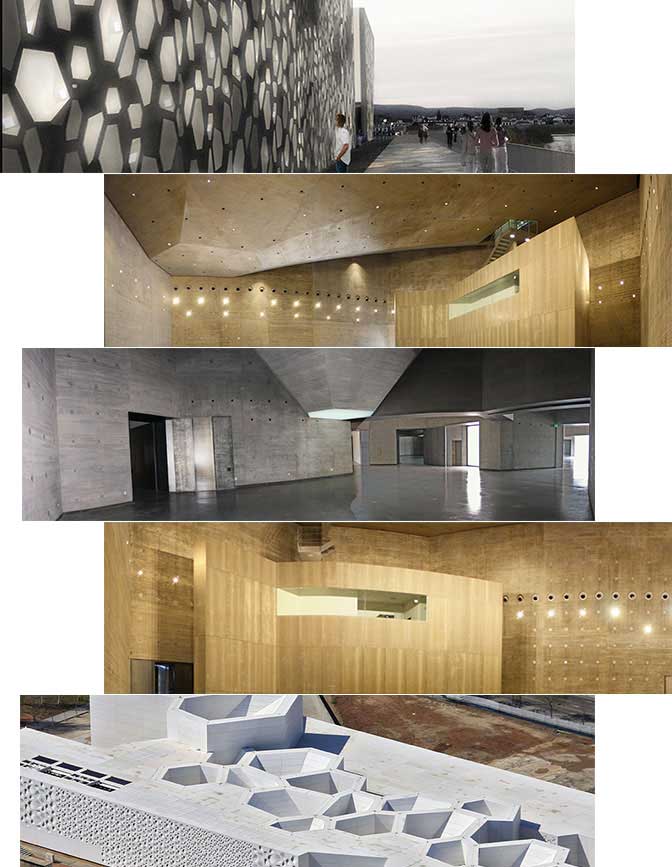 The C3A building, designed by architects Nieto and Sobejano, is closely linked to the city and the distant memory of its Hispano-Islamic past. Its design incorporates the simplicity of hidden geometric laws found in the multi-spatial architecture of the Great Mosque-Cathedral of Córdoba, as well as permutations of the ornamental motifs of lattices, pavements and arabesques. The building¿s Brutalist architecture is based on a hexagonal geometric pattern in which plan and elevation seem to play a combinatorial game, with ornamental details and elements that allow natural light into the workshops and galleries, although there is no obvious spatial hierarchy.

One of its most salient features is the media wall, an exhibition space in open dialogue with the city of Córdoba. This facade is a massive 100-metre screen pierced by 1,319 hexagonal holes, with monochromatic LED lamps installed behind them. Various artists have created works for this media wall using a computer automation program, which are projected each day after sunset for the whole city to see. During the day, sunlight passes through the geometric openings and floods the covered inner atrium of the C3A.

The permeable, adaptable design of the galleries, with their bare concrete slabs and continuous welded beams, makes them highly versatile spaces and links them both conceptually and physically to the production areas, the studios for resident artists on the ground floor, and the classrooms on the upper floor. These spaces are connected by a large side corridor that runs along the entire length of the building, conceived as a common area of intersection and encounter. This corridor allows visitors to explore the building and provides access to the exhibition rooms and other spaces like the Black Box and the Video Room.